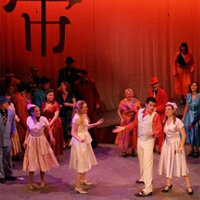 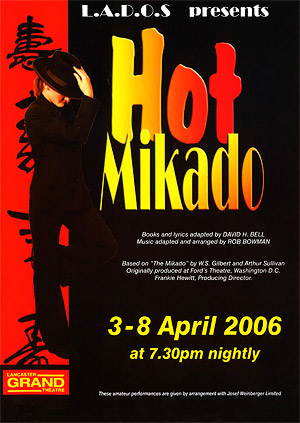 Nanki-Poo, the son of The Mikado, is travelling incognito to escape the advances of Katisha, an over-sexed femme fatale. He falls in love with Yum-Yum only to discover from Pish-Tush and Poo-Bah that she is to be married to Ko-Ko, previously condemned to death for flirting. Ko-Ko has been reprieved and now has the top job in Titipu - Lord High Executioner.

Meanwhile, The Mikado has decreed that unless an execution takes place the town will be reduced in rank to a village so Ko-Ko must find a candidate for the execution. Nanki-Poo is intent on ending his life as Yum-Yum is to marry Ko-Ko. Ko-Ko offers Nanki- Poo one month of marriage to Yum-Yum in return for being beheaded afterwards. Titipu celebrates its reprieve but the love sick Katisha arrives looking for and finding Nanki-Poo. She is prevented by Yum-Yum from telling everyone Nanki-Poo's true identity. Pre-wedding celebrations are underway for Nanki-Poo and Yum-Yum.

However, they unearth the shocking decree that when a man is beheaded, his wife is buried alive. Ko-Ko realises that he cannot go through with the execution and tells them to get married and that he will forge the execution certificate. Katisha arrives with The Mikado who demands proof that the execution has taken place. He then realises that it is his son's name on the certificate and means death for entire town. Nanki-Poo informs Ko-Ko of his plan to "return from the dead", saving the town, if Ko-Ko will make the ultimate sacrifice...

A Tale of Two Mikados

Back in 1904 when Lancaster Amateur Dramatic & Operatic Society was just 13 years old, they decided that the show they would perform that year, would be Gilbert & Sullivan's 'The Mikado'.

Forty five years later, in 1949 they decided that they would give it another go, after all it had been well received in 1904, hadn't it?

Now for 2006, they thought it must be about time for another revival. Well, I mean, you wouldn't want to bore the good citizens of Lancaster and Morecambe by doing the show too often now, would you?

But then they thought, why not do something a little bit different? Which is why the 2006 production is called 'Hot Mikado', a musical which first saw the light of day in 1938 as a film, starring the legendary trumpeter, Kenny Baker as Nanki-Poo. The version which L.A.D.O.S. has chosen to perform however, was rewritten in 1985. The music and lyrics are essentially Gilbert & Sullivan... but with a twist! The action has been transported from ancient Japan to 1940's America, with several of the musical numbers played in the jazz/swing style of that era, and 'Three Little Maids' who sound remarkably like The Andrews Sisters! For the more traditional G & S aficionados however, the storyline, and several of the musical numbers, are still pretty much as Messrs. Gilbert & Sullivan originally intended.

To keep a certain amount of continuity within the society, back in 1949 a certain Mr Roberts was a member of the cast of 'The Mikado', and now in 2006 his daughter, Peggy Brierley will be in charge of this production of 'Hot Mikado'. There are also a couple of members of that 1949 cast who are still actively involved with L.A.D.O.S., namely Margaret Hartley who has recently retired as Secretary of the society, and Chris Riley, (son of the legendary Chris "Pom" Riley), who is himself, a former president of L.A.D.O.S.

Lancaster Amateur Dramatic and Operatic Society, have been in existence for 114 years, and during those years have gained quite a reputation for being adventurous in their choice of shows. Indeed, they have often been privileged to secure the rights to be amongst the first in the country to stage a number of modern musicals, just as soon as those rights were released to amateur societies.

'Hot Mikado' has not been performed in this district before, and L.A.D.O.S. are the first society in this area to be awarded the right to stage it in Lancaster. However, it is very well known in parts of the Manchester region, where several of their amateur societies have, regularly, staged this lively show. L.A.D.O.S. aims to give local theatregoers the opportunity to judge for themselves, with their 2006 production, which runs from the 3rd to 8th April 2006 at the Grand Theatre, Lancaster. Rehearsals start at 7.30 p.m. on Monday 19th September 2005, in their clubroom at 98 St Leonardgate, (opposite the theatre), and new members are always welcome, whether it be to sing and dance on stage, or simply to help out with the many backstage jobs which are essential in ensuring a successful production.


Officials of the Society
Books and lyrics adapted by David H. Bell
Music adapted and arranged by Rob Bowman

Based on "The Mikado" by W.S. Gilbert and Arthur Sullivan
Originally produced at Ford's Theatre, Washington D.C.
Frankie Hewitt, Producing Director
Back to Our Productions